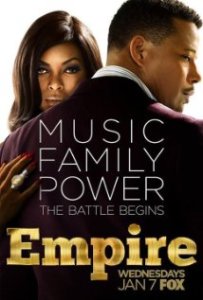 Empire is one of 2015 most talked about new shows. And I can confirm well based on the first episode that it is a good show. It has this weird yet creative essence about it, this is probably due to the flashback that we see.

However when discussing the essence I mean that it just has this lively vibe this is due to some of the music that is played, yet at the same time it has a dark vibe as Cookie (Taraji) was just recently realised from prison. Any ways enough about the “essence” of the show and let me review the pilots episode.

Empire opened up with a music intro, I’m not going to lie when Jamal was playing on his piano with his brother Hakeem rapping I literally thought that the show was a musical and it almost reminded me of Dream Girls. There is not many shows that is also based on music now a days which is what I found refreshing about Empire. The show is focused on Lucious (Terrance) trying to decide which one of his three sons will be the sole heir of his company. Andre is the eldest of the three and the only one who is not a musician he’s the CFO of empire and suffers from bipolar. Jamal is the middle son who is a singer/ songwriter and is also gay. In the pilot episode it looks as though all he wants is his fathers love. Hakeem is the youngest son probably the most famous out of all of them and is a rapper.

What I found the most interesting aspect of the show is how Lucious treats his son Jamal because of his sexuality. I love that the show shows the ugliness that goes on with people’s sexuality such as homophobia and does not paint a pretty picture. Just seeing cookie in the first episode I can see why she is called cookie, she’s such a strong character and you can clearly see that she does not take crap from anyone.

Although I do not like Lucious it is clear as day that he still loves Cookie. So far I have fully enjoyed the pilot episode and hope that throughout out the season it will remain consistent.