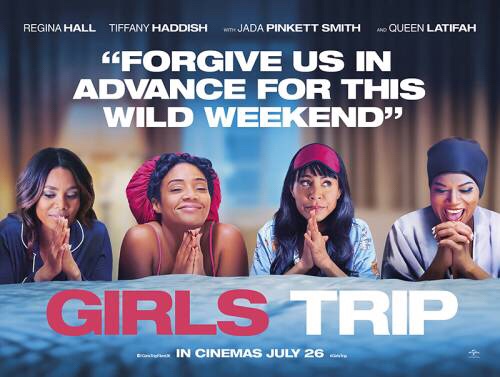 The movie is about four women that have been best friends since college who are known as the Flossy Posse, who over the years become distance and have not seen each other in a few years. Ryan Pierce (Regina Hall) is a keynote speaker for Essence music festival, she decides to invite her friends to come with her and turn it into a girl’s trip. They were hoping that it would be a weekend they would never forget. However before the girls could embark on a fun weekend they find out that Ryan’s husband (Mike Colter) is having an affair.

After finally watching Girls Trip I have no idea why it has taken me this long to finally watch the movie. I thought the movie was funny. Although, when I first saw the trailer for Girls Trip, I couldn’t help but notice how similar it was too Rough Night. Girls Trip in my opinion was by far way better in so many ways, it was funnier and the plotline made more sense.

The cast was amazing; I have nothing bad to say. Regina Hall’s character did have some comedic moment especially during the sausage scene I could not help but laugh. Her character was also relatable. In the movie she knew that her husband was having an affair but chooses to ignore the fact. This is because although they were married they were also business partners; she thought she would not be able to continue her business without him. It seems that it is sometimes easier to advice people to leave a partner when they cheat, but when it comes to ‘practice what you preach’ it can prove to be difficult. While all of them did make me laugh there was one character that blew me away with her performance and that was Dina.

Now Dina (Tiffany Haddish) is a character she’s a friend we’d all love to have. She was by far my favourite character, she’s funny, crazy, loyal (a die-hard friend) and inappropriate. She’s described as the “wild one” and we can definitely see why. She encouraged her friends to let loose and just enjoy themselves. Whenever I saw her on the screen I just knew that at some point she’d make me laugh. My favourite scene had to be when she was buying absinthe from Mike Epps character, I could not stop laughing. I finally realised how crazy she really is.

The only thing I wasn’t too much of a fan off was the ending. There were two scenes I wasn’t too fond off. The first being, when the girls during the movie had a big rift, they ended up saying some harsh words to each other yet ended up being friends again. I just thought that they forgave each other a bit too soon and wanted to see some development there. The second being, when Ryan and Julian got together while I was happy to see them ending up together. I couldn’t help but think how cliché it was. Isn’t this how all movies end?

To conclude I thought the movie overall was funny, I loved how the girls had fun. It made me want to plan my own girls trip I would definitely watch it again.